As your circuits get bigger and more complex, you will soon reach the point where you want to split the circuit into manageable parts and reuse those parts several times in your circuits. In Antares these parts are called "subcircuits".

In the chapter "First Steps" you have already made your first experiences with the creation and reuse of subcircuits. The chapter "Circuits" describes in detail how to create circuits.

This chapter describes how to build a circuit that can be used as subcircuits in other circuits.

It often happens that you have not yet decided at the beginning of the design of a new circuit whether the circuit should be reused as a subcircuit later on. At this stage, you may prefer to use switches and LEDs to interact with the circuit during simulation. If you then decide to use the circuit as a subcircuit, you will replace some (or all) switches with inputs and LEDs with outputs. Since the input components of Antares - at least in the outermost circuit - can also be used as switches during simulation, and output components represent the current signal value, you can use inputs and outputs instead of switches and LEDs right from the beginning of the design phase.

Ports must have a unique name so that they can be identified at various points by the user of the circuit, e.g. in the symbol of the subcircuit. Antares itself uses a different identification of ports internally. If a circuit uses a subcircuit with an input named "A" and a wire leads to this input, Antares does not remember the name "A" as a reference, but the internal number of the port (see below). This allows you to change the names of ports in subcircuits even if the subcircuit is already used in other circuits.

Digital circuits often have inputs and outputs that transmit an inverted signal and whose names are marked with a crossbar above the text. An example is a flip-flops with the outputs Q and Q. You can create a crossbar in Antares by placing an exclamation mark in front of the letter that you want to have a crossbar. Longer text with crossbars can be additionally marked with round brackets.

Antares supports bidirectional ports. The example below shows a section of the "Memory Buffer Register" from the "Microprocessor (Tannenbaum)" example circuit. Depending on the inputs "WR (Write)" and "RD (Read)" and the help of the tri-state buffers, port "D" can both accept data and output data.

The basic components and subcircuits of the standard Antares library assume that signals in a circuit basically flow from left to right. This seems to be a standard - at least in western culture - in digital technology. For this reason, ports point east by default.

This standard is problematic when signals with several bits are used, since in binary representations of these signals the least significant bit is on the right. Shift register or adder circuits then tend to require signals to flow from right to left. I do not know if there is a common solution to this conflict in the domain; if you develop your own libraries with Antares, you should start by thinking about this topic.

The symbol editor consists of a tree that shows the elements that can be dragged into the symbol and the large drawing area in which the symbol is drawn. Additionally, the drawing tools can be used to add graphical elements such as rectangles to the symbol.

The elements in the tree are divided into three categories.

The inputs and outputs of the circuit that can be included in the symbol. They are shown in the symbol with a connection dash (pin) and the name of the port.

Controls are additional components of the circuit that can also be included in the symbol. See the "Controls" section below for more details. Controls are represented differently in the symbol depending on their type. Control pins display the current signal value of the pin, while interactive controls such as switches, LEDs, or 7-segment displays are displayed in the same way as in the circuit.

This tree node contains all subcircuits of the circuit for which the symbol is created. It is used to include inner control elements of subcircuits in the symbol.

When a port is selected in the symbol editor, its attributes are displayed in the properties view, most of which can be edited.

Displays the ID of the port (cannot be changed). This ID can be used for Scripting applications.

The cardinal point to which the pin of the port points.

Pins with a bit width greater than 1 are by default a small annotation that shows the number of bits of the pin. This attribute can be used to hide this annotation.

Only available for inputs. Controls the logic annotation of this pin. With the value "Negative", a small circle is displayed outside the symbol for this pin.

Available for inputs only. With the value "Edge" a small triangle is displayed inside the symbol for the pin.

Only available for outputs. Depending on the value "None", "Tri-State" or "Master-Slave", the corresponding annotation is displayed within the symbol for the pin.

Properties of the symbol

When you click on the background of the drawing area, the Antares properties window displays the attributes of the entire symbol.

In this attribute you can enter a script that can be used to additionally influence the representation of the symbol (currently still within narrow limits) during simulation. For example, the multiplexer components of the standard Antares library contain a script that represents the selected data path within the symbol by drawing a line from input to output. 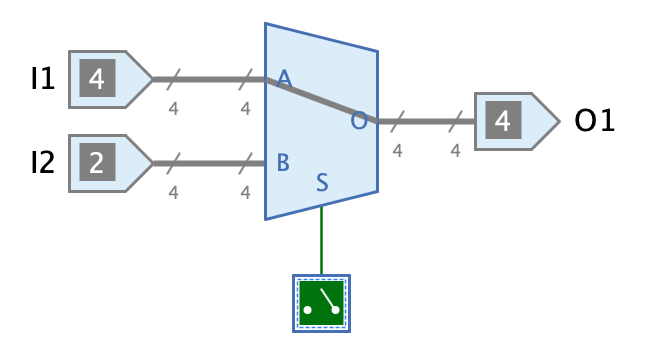 Scripting is an advanced concept. See the chapter Scripting for more information.

Controls in symbols are an extremely powerful concept that allows you to create dynamic and interactive symbols.

The following built-in components of Antares can be used as controls.

This allows applications like the CPU of the example project "Microcomputer (Tannenbaum)", whose symbol displays the current values of the three most important registers "SP (Stack Pointer)", "AC (Accumulator)" and "PC (Program Counter)". 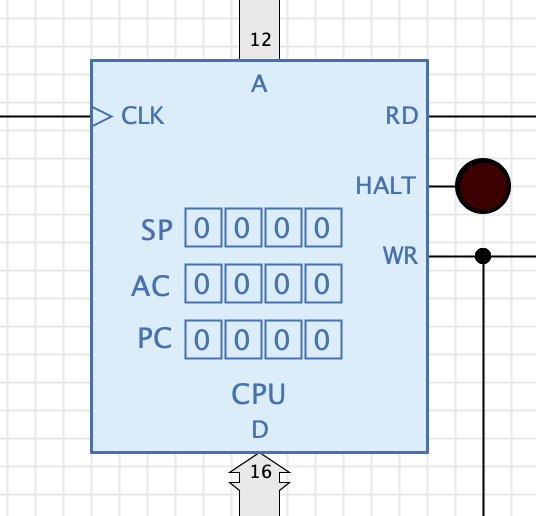 No programming or scripting is required: The CPU is a circuit created purely from the components of the standard library. The displayed registers are not directly contained in the CPU circuit, but in the "Register File" subcircuit that is used by the CPU.

Another example that illustrates the possibilities of control elements is the following keyboard circuit. It contains 9 switches arranged in three columns and three rows. The circuit outputs the address of the pressed switch via the respective outputs Cx and Rx. 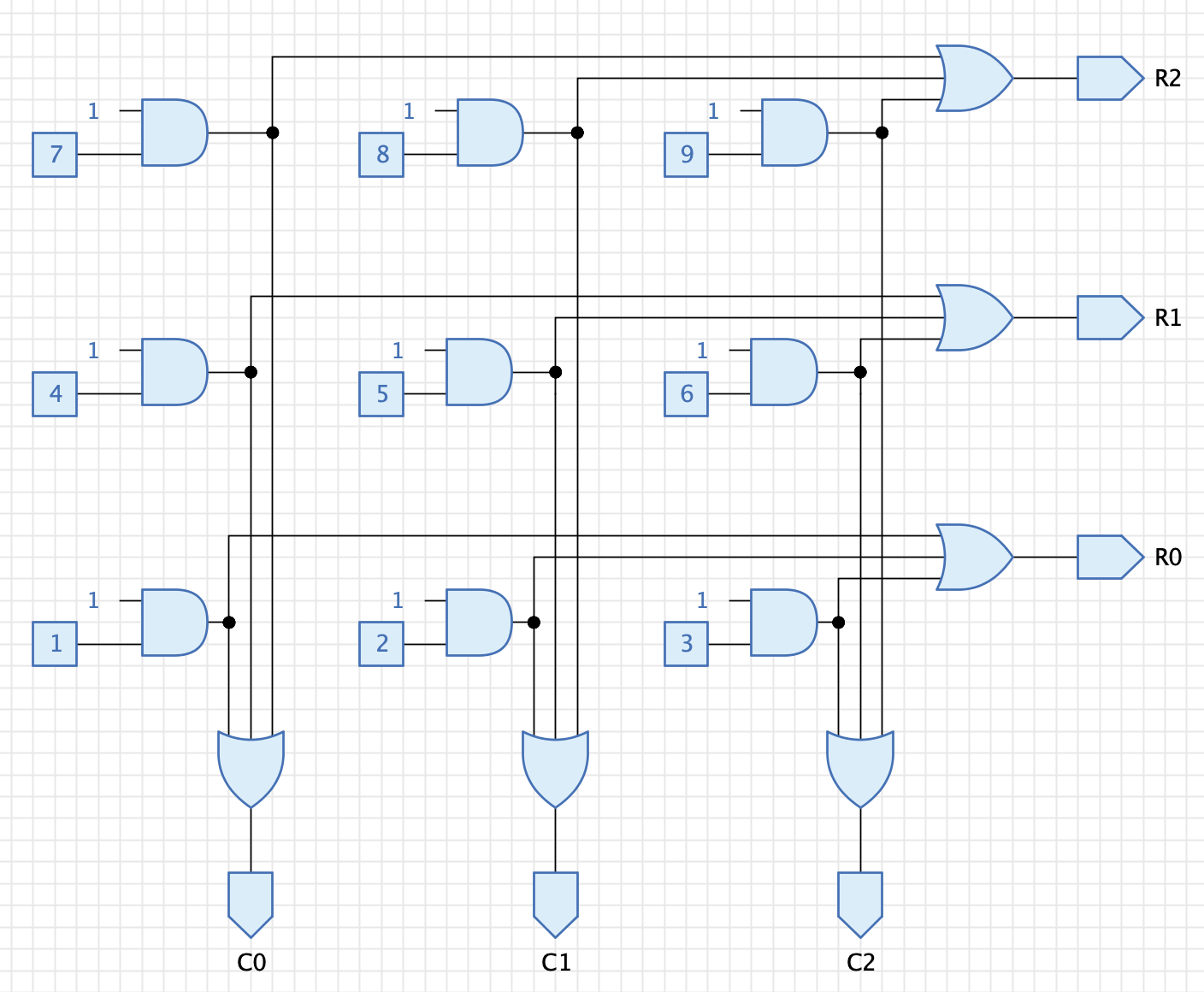 In the symbol of the circuit all switches are now added as controls and arranged in a 3x3 matrix.

Notice how the user can use the keyboard subcircuit just like is was a built-in component during simulation. It displays its switches with their current states and allows the user to click the switches with the mouse.

If you take this idea even further, you can imagine to include a special circuit in a project whose symbol contains all interactive elements of all subcircuits. Thus, this special circuit can be used like the "front panel" of a complex circuit; if you open this circuit, you will only see the interactive elements of the system, i.e. the switches, LEDs or 7-segment displays.